Date of birth block: Candidates who are born between 13 January 1998 and 02 January 2002 are illegible to appear in rally recruitment.

Notification of Rally recruitment for the districts of Tamilanadu State. Starting from 09 October to 14 October 2017 for Group "X" technical trade.


Yeotmal districts of state of Maharashtra


This recruitment Bharti will be conducted from 11 Sep 2017 to 13 Sep 2017 at VIR Savarkar Indoor sports stadium, Race course Road.


Districts to be covered :- 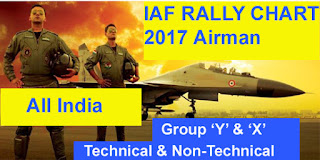 27, 28 May 2017 : For Group ‘Y’ (Med Asst trade only)
Wayanad, Kozhikode, Kasargod, Kannur &
Malappuram districts of state of Kerala and Mahe
district of UT of Puducherry.
Educational Qualification.
(a) For Auto Tech, GTI & IAF(P) Trades . Candidate should have passed Intermediate 10+2 / Equivalent Examination in any stream/subjects
approved by Central / State Education Boards with minimum 50% marks in aggregate and 50% marks in English.
(b) Group ‘Y’ (Non-Technical) Med Asst Trade : Passed 10+2/ Intermediate / equivalent exam with Physics, Chemistry, Biology and English with a
minimum of 50% marks in aggregate and 50% marks in English.

The rally will be start from 21 November 2016 to 25 November 2016.
21 to 22 November 2016 : - Ernakulam, Thrissur, Alappuzha, Kollam, Kottayam, Idukki, Pathanamthitta districts of State of Kerala and UT of Lakshadweep.

Educational Qualification:-
Candidate should have passed Intermediate / 10+2 / Equivalent Examination in any stream/subjects approved by Central / State Education Boards with minimum 50% marks in aggregate and 50% marks in English.
Note - 1: Boards recognized/affiliated by Council of Boards for School Education (COBSE) will only be permitted.
Note - 2: Exact aggregate % of marks before decimal as written in the marks sheet of 10+2/Intermediate/Equivalent OR calculated as per the rules of concerned Education Board will only be considered (For example 49.99% should be taken as 49% and not to be rounded off to 50%).